Judge Amy Totenberg published her opinion on the issue regarding the legality of Georgia’s electronic voting system on October 11, 2020. On pages 81 and 82 of her opinion, she wrote that the Dominion voting system DID NOT comply with Georgia law. Although Judge Totenberg did not issue injunctive citing that it was too near an election, nonetheless, every election held using the Dominion election system has been unlawful and void, and should have been remedied by holding another election using voting methods that are lawful under the Official Code of Georgia.

Here are examples of cases in Georgia that were lawfully remedied in the past:

The present petition alleges that this election was held in utter disregard for the law and it thereby alleged grounds for decreeing the election void, and the court erred in dismissing the amended petition.” 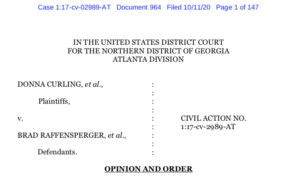